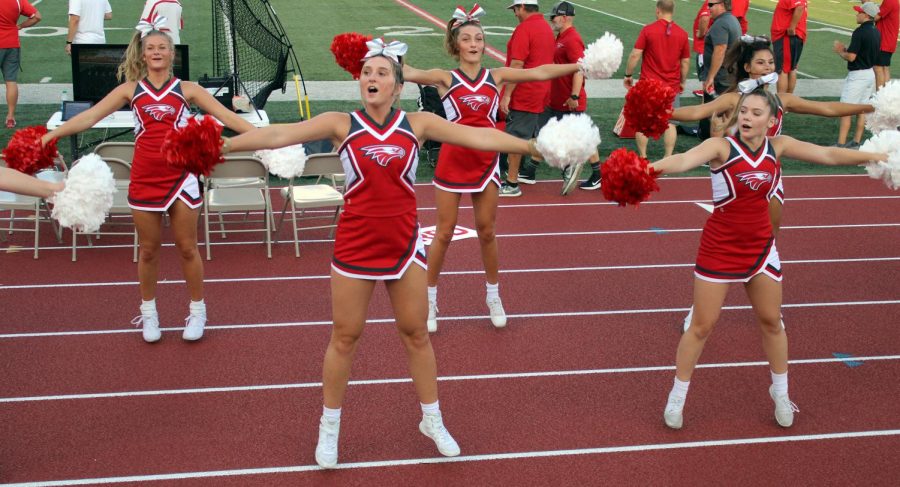 The Nixa High School cheer team went to state in December of 2021. The team had been working for almost 6 months in preparation since summer, with many hours of practice a week. One of the seniors, Madison Caetano was the captain for the season. She said she had been enjoying being captain of the team.
“I have been trying to step up and take the role of a leader, as well as having everyone’s back,” Caetano said.
The opportunity to perform at state was exciting for the entire team. The team had not had to opportunity since 2018. They were ready to perform well at state and showcase the skill they had. One of the things that made going to state so exciting was the routine the team was performing. It exemplified the ability of every individual and the team as a whole.
“I absolutely love our routine for state,“ Caetano said. “There is a lot of different elements of our routine which makes it eye-catching and fun to watch.”
The team performed a routine for the Nixa High School before going to state. The performance was advanced and very interesting to watch. The team showed their ability to stay together and the excitement they had while performing. One of the cheer coaches, Ariah Willoughby said what she was most excited for was to see the hard work they put in for hours and hours to perform at state. She loved being able to coach and prepare the team and was proud of the work they had put in.
“This team is one of the most hardworking teams that I have coached yet,” Willoughby said. “The grit and energy this team has is amazing, they are unbelievably ready for that state title.”
One of the factors that made the team’s state routine unique was the co-ed stunts they performed. A few boys had been training with the team since summer, so they were able to make the routine even better and add a new element.
“The inversions and our co-ed skills have been most difficult to learn,” Willoughby said. “The boys have really grasped the skills but it is a brand- new concept for us coaches to be able to teach.”